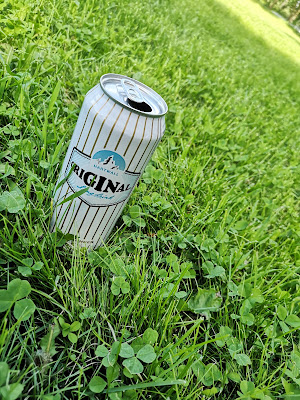 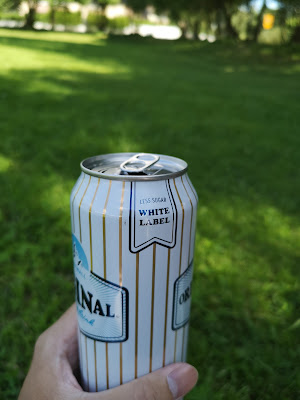 I was actually excited to see the can said "less sugar", I thought it would mean that it's "less sweet".
Instead, there is an artificial sweetener, Aspartame used in it.
Just like a dog cannot replace a human being although both have a brain and four limbs, replacing sugar (well not completely, it contains sugar as well. but "replacing sugar partially") with a sweetener doesn't work.
Both are sweet, yes. But the quality of sweetness is different. And, I think, by adding sweetener they somehow ruined the Lonkero-ness of the drink.
Its taste surely resembles Lonkero and it's fun to have a ginger taste in it. But this sweetness which you can only feel with front and sides of your tongue... It feels as if there's a big chunk of vital taste information missing, that you would feel in the back of the tongue. In other words, it lacks the wholeness of the taste. The sweetness is different from sugar's, it lingers on your tongue but it tastes more like of a xylitol gum than a sugar's. 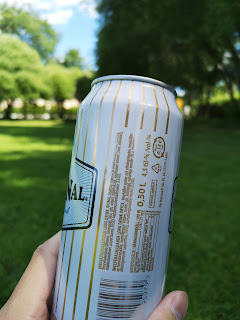 There is something missing, and I don't think I can finish this drink. It's THAT different from what I expected from it, and to me, it's THAT bad.
And I have difficulty understanding with the concept of this "less sugar (*added sweetener)" thing. Less sugar because sugar is bad? Then there should be just less sugar.
Replacing the missing sugar would add sweetness, would never be just simply replacing the almost-same things. And in my opinion, it just tastes bad. As if someone who doesn't understand the taste thought "oh sugar and salt both absorb water, that means these two can be interchangeable!"
The sweetener should be carefully used to compensate the taste, and the maker of the product should tweak the taste before selling it.
Also, somehow this drink made me lose my appetite. I'm not sure if it's a good thing or a bad thing.
One thing I am very sure of is that I would never buy this again.

9月 26, 2020
I eat “riisikebab” (or “kebab riisillä”, kebab with rice) very often. I have a stomach problem and I should be following the FODMAP (Fermentable Oligo-, Di-, Mono- saccharides And Polyols) diet, otherwise my stomach goes crazy. But riisikebab, is almost always a safe choice. No gluten, no onion, no beans, no broccoli, no cabbage, no jalapeno, no garlic, no coconut, no blueberries (although I’m in Finland!), and the list goes on. But riisikebab, is almost always a safe option. There is rice, kebab meat slices (which is made of… beef I guess, in Finland at least*), and a salad consisting of lettuce, and often tomato slices, and onion slices with one or two jalapenos, with some sauce on the kebab and on the salad. I do have to remove the onions and jalapenos, but otherwise it’s mostly safe for me. A riisikebab meal is often affordable, from 8 to 12 euros, but mostly just below 10 euros. And, if you order it as a take out meal, and often I would become full eating two-third of it, so the
3 件のコメント
続きを読む

7月 19, 2020
"Atria Japan Tonkatsu -Maustekastikkeella". It’s claiming to be pork with “Japan Tonkatsu seasoning sauce”. So how is it? Interesting Package Pushing Gimmick I cooked it following the direction on the package. The folded two-part package (meat part and sauce part is separated) was interesting. You have to unfold the package and push the sauce part hard, so that fresh meat will meet with the sauce. Then you leave it in the fridge for 30 minutes to marinate. Then fry the meat for 8 minutes. (photograph taken after the "push") I'm not sure if it is a gimmick to just get people’s attention, or if it would be beneficial for the company as in it required less facility space or equipment than making a product that is in the package already marinated, or if this way of packaging actually benefits the taste of the cooked food compared to those marinated-and-packed ones. (-30% for a reason?) Either way, it was fun to press the sauce, it was a bit like pressing a huuuge bu
2 件のコメント
続きを読む