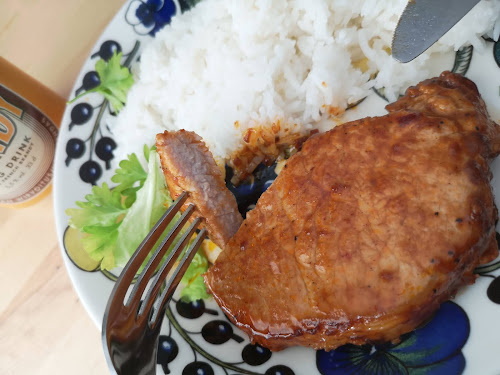 I cooked it following the direction on the package. The folded two-part package (meat part and sauce part is separated) was interesting. You have to unfold the package and push the sauce part hard, so that fresh meat will meet with the sauce. Then you leave it in the fridge for 30 minutes to marinate. Then fry the meat for 8 minutes. 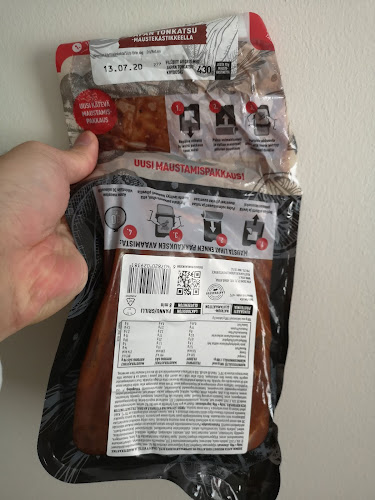 (photograph taken after the "push")
I'm not sure if it is a gimmick to just get people’s attention, or if it would be beneficial for the company as in it required less facility space or equipment than making a product that is in the package already marinated, or if this way of packaging actually benefits the taste of the cooked food compared to those marinated-and-packed ones. 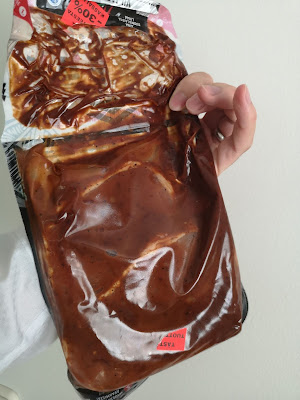 (-30% for a reason?)
Either way, it was fun to press the sauce, it was a bit like pressing a huuuge bubble of a bubble-wrap, that is somehow like a pimple. Sounds grotesque I know, but it was fun. 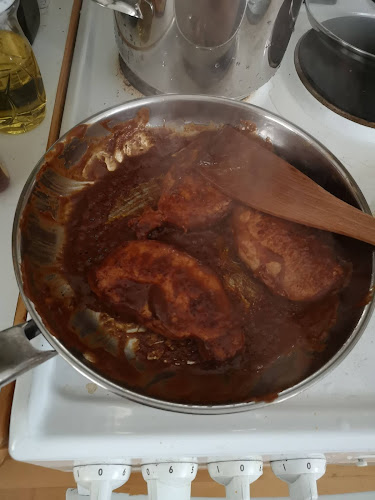 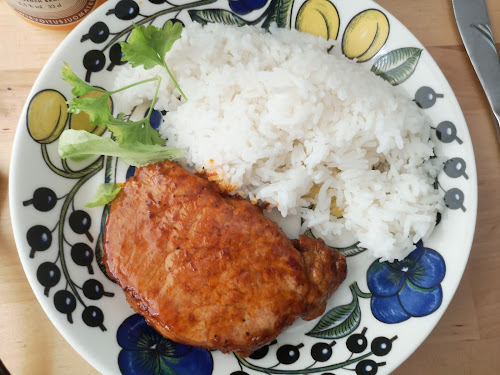 (This looks like... Teriyaki pork. Where is my Tonkatsu??)
Often when I eat cooked pork meat, I would feel saddened by the dry meat. Often when I cook, and often when I eat pork on supposedly professionally cooked restaurants (in Finland at least). But this one was not that. I should also make another post about Atria’s other meat, but this one was as good as other Atria’s rather expensive meat products. The meat was juicy, soft but chewy, and never dry.
The brown coloured sauce that is used to marinate the meat was a bit like Worcester sauce, but spicy hot! Not too hot, but it was still tongue-heating spicy sauce.

What Was Tonkatsu Again?

However, I don’t see any Tonkatsu here. Let me explain what Tonkatsu is first. 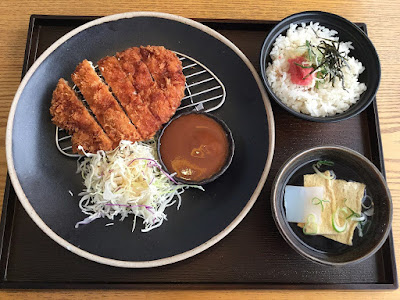 Image by: Kgw1226 (CC BY-SA 4.0)
Tonkatsu (see above) is a name of a Japanese pork meal, and Ton in the word means pork, and Katsu means cutlet. That means that it’s a pork cutlet, or leike in Finnish. A pork slice with panko coating, fried.

To criticize this Atria’s “Japan Tonkatsu -Maustekastikkeella”, I should also mention another aspect of Tonkatsu in Japan. Its sauce. The sauce used on Tonkatsu is often called Tonkatsu Soosu, or Tonkatsu sauce. But in reality, it is just a branded Worcester sauce (to be more precise, Tonkatsu sauce is a thick variation of Worcester sauce). And from my experience, I can tell that none of the Tonkatsu sauces I have tried was that spicy.
Now Atria Japan Tonkatsu -Maustekastikkeella. It is not made to cover the slice with panko coating. What I see that resembles to “Tonkatsu” in this product is its sauce. But as I mentioned above, it’s not really a sauce invented for Tonkatsu (nor it should be spicy), it’s just a Worcester sauce. With extra spice.
So the product should be called "Tulisella Worcester -Maustekastikkeella" (spicy Worcester seasoning sauce). As there is nothing particularly "Japan" about this, and there seems to be no reason mentioning “Japan Tonkatsu” other than that this year would have been the year of 2020 Tokyo Olympics so people might have bought it as people’s curiosity toward Japan should be boosted etc.

9月 26, 2020
I eat “riisikebab” (or “kebab riisillä”, kebab with rice) very often. I have a stomach problem and I should be following the FODMAP (Fermentable Oligo-, Di-, Mono- saccharides And Polyols) diet, otherwise my stomach goes crazy. But riisikebab, is almost always a safe choice. No gluten, no onion, no beans, no broccoli, no cabbage, no jalapeno, no garlic, no coconut, no blueberries (although I’m in Finland!), and the list goes on. But riisikebab, is almost always a safe option. There is rice, kebab meat slices (which is made of… beef I guess, in Finland at least*), and a salad consisting of lettuce, and often tomato slices, and onion slices with one or two jalapenos, with some sauce on the kebab and on the salad. I do have to remove the onions and jalapenos, but otherwise it’s mostly safe for me. A riisikebab meal is often affordable, from 8 to 12 euros, but mostly just below 10 euros. And, if you order it as a take out meal, and often I would become full eating two-third of it, so the
3 件のコメント
続きを読む